One of Johanna’s earliest memories is singing solo at the age of 5. She fell in love with the stage and hasn’t looked back since.  (Watch Johanna’s showreel below)

Attending ballet classes from an early age she is also a trained dancer. In her teens, she decided to join a local production company playing roles in shows such as Grease and Blood Brothers.

Approached by a local artiste management agency, she was offered a contract as a Cabaret entertainer touring the North West and North East of the UK performing at Holiday venues and Hotels. This is where she earned her stripes and was still only 20 years old.

Keen to progress and spread her wings, she travelled to London for her first major audition for Costa Cruise lines and was offered the role of Principal Singer sailing to South America.  This was the first of many contracts as lead vocalist, and remains a fond memory for Johanna.

Next came her time in theatre, performing at the Famous City Varieties in Leeds with some well-known names, and also her opportunity to sing solo at Blackpool Opera House. An invitation to perform in Italy gave Johanna the opportunity to top the bill in five star hotels and resorts.

An accomplished wedding singer in Preston and throughout the Northwest region, Johanna has performed at many weddings including the ceremony of the winners of Rock FM’s bridal wars at the prestigious Eaves Hall. She was also invited to perform at several awards ceremonies on behalf of the Lancashire Evening Post and recently performed at Blackburn Rovers Ewood Park for a black tie charity event in aid of Cancer research. She continues to entertain audiences at special functions and celebrations.

As a recent addition to her list of recognition’s, she now performs a superb tribute to Celine Dion travelling around the UK.

Undoubtedly one of the finest vocalists in Preston and the Northwest, she has come a long way since her early brush with the stage.

Johanna has a large repertoire of songs, quality PA equipment with lighting that is PAT tested and public liability insurance. 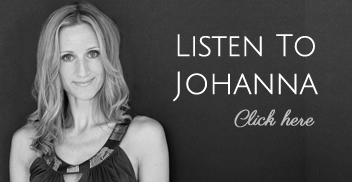